For What It's Worth

From the Department of Anecdotes that Bear no Relation to Actual Electoral Outcomes, I noticed that Barack Obama T-Shirts seem to have replaced the confederate flag shirts that used to be so strangely prevalent for a Yankee state. 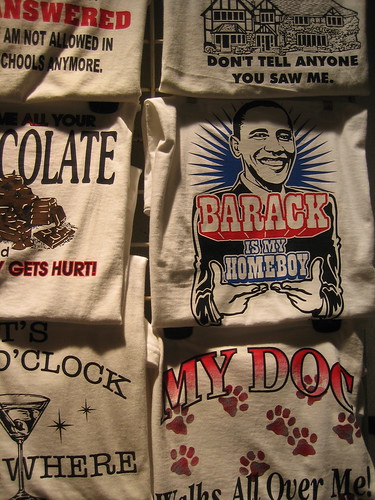 Not exactly meaningful, but it was a welcome change!

What Did You Guys Do?

I leave town for one week and the financial markets come tumbling down? I actually sought a near complete news blackout during my brief break, so I'm just easing back in and catching up now.

At least we know that George Bush has appointed competent and diligent professionals to important positions in government to steer an unsteady market with a steady hand.

On an unrelated note, did anyone hear This American Life this week? It's about how George Bush didn't appoint competent and diligent professionals to important positions in government to steer an unsteady market with a steady hand.

It is going to be an exciting and crazy 54 days.

See everyone on Sunday September 28th at 6:00 PM in the Myers Hall Conference Room for our first official meeting of the year and keep checking in for details about our Presidential Debate Watch Party on September 26th!!

I admit, it bothers me that Palin thinks that the fighting in Iraq is a "task from God." I was also intrigued by her exhortation to pray for the gas pipeline. They mock Obama for suggesting that you inflate your tires, but prayer is part of an energy policy?

The Daily Show was on tonight, but the video isn't on their website yet. But This Samantha Bee piece from yesterday was good also.

The Daily Show does a much better job of cutting through the BS than just about any news organization. Those delegates are a piece of work, huh?

[UPDATE] Here are some more, from the best fucking news team on television!

I sure am glad that hate week is over now. Nothing like seeing Republicans lie through their teeth about their own policies and the policies of Obama. Every time a Republican talked about the "Liberal Left Washington" that has caused the problems we have today I wanted to smack them. I do not know where they have been the last 8 years but I am pretty sure the President has been Republican during all of these problems.

Anyway here is a great video that shows how pathetic FOX News is.

"There's some speculation that there was, uh, union organizing, or, uh, organizing the community to take advantage of welfare programs, or whatever."

Why not just call him uppity and save us the 6 hours of speeches each day? Oh, nevermind.

The Republicans have figured out a pretty effective and cynical style of running for office. It's simple and easy, and goes like this:

And that's about all I can say about the speeches last night.

"Oh my god John he's being such a douchebag don't come in here!"

Open Mic Night at the RNC

No, I don't mean just because they're letting anyone speak (Romney and Giuliani?) I'm talking about Republican hacks Peggy Noonan and Mike Murphy caught on live mics expressing their real feelings about Sarah Palin (via TPM).

This is a truely amazing video. It's not really that surprising to people who pay attention, but it is stark to see the contrast between what they really think and the party line they regurgitate on TV. Pass this along!

Chuck Todd: Mike Murphy, lots of free advice, we'll see if Steve Schmidt and the boys were watching. We'll find out on your blackberry. Tonight voters will get their chance to hear from Sarah Palin and she will get the chance to show voters she's the right woman for the job Up next, one man who's already convinced and he'll us why Gov. Jon Huntsman.
(cut away)

Mike Murphy: You know, because I come out of the blue swing state governor world: Engler, Whitman, Tommy Thompson, Mitt Romney, Jeb Bush. I mean, these guys -- this is how you win a Texas race, just run it up. And it's not gonna work. And --

MM: Still McCain can give a version of the Lieberman speech to do himself some good.