It all makes sense, McCain is just Dumb

For those of you who watched the Saddleback Church Forum as I did you may agree with me that something seemed odd about McCain's responses. I have come accustomed to McCain's staggered speech and awkward pauses but this time he really seemed robotic. He flew through the questions with one liners, barely taking anytime to think thoughtfully about his responses as Obama did. It was as if he had already known the questions and what his responses would be, and just paused for a brief moments to make it seem as if he was thinking off the top of his head. After hearing that John McCain was not in a "cone of silence" but was actually riding in a motorcade over to the church it all made sense that McCain may have actually known many of the questions beforehand and that is why he responded the way he did. Surely he could have easily listened to Obama's responses on the radio and thus would have known the questions in advanced as he drove over.

Then today I came across this article by Jack Cafferty which explains so many things about McCain and the Saddleback Forum.
The reason McCain won't let the media interview him without warning or approval, and the reason McCain's answers seemed so shallow and thoughtless during the Saddleback Forum (and throughout the campaign process in general for that matter) is because he's just dumb. 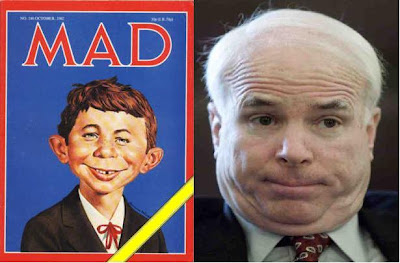 Instead of responding with honest answers that you could tell came from the heart as Obama did, McCain relied on stump speeches and short responses anytime he was confronted with a question he didn't like. As a Christian I was surprised at the brevity of McCain's response "It means I'm saved and forgiven" when asked what faith meant to him. That response is straight out of bible school for preschoolers and shows no understanding of faith to me. It's basically as generic a response as McCain could have given there.

So as I look back at the Saddleback Forum and my understanding of McCain's rhetoric while keeping in mind the article mentioned it all makes sense. McCain is as shallow and dumb as our current President. He gave one-line answers during the forum possibly because he already knew the questions and what he would say, but most likely just because he is unintelligent and unable to think of thoughtful responses on the spot.

The article also points out as an example of McCain's stupidity that McCain graduated 894th in his class out of 899 at the Naval Academy at Annapolis. Not only does McCain suffer from the normal memory loss associated with being 72, we now are starting to realize that he didn't exactly start off as the sharpest knife in the drawer. I think it's time we start paying attention to McCain's stupidity before it's too late. Not only does he vote along Bush's platform we now know he has the same lack of intelligence to go with it.