One of the aspects of this election that hasn't really penetrated most of the mainstream media narrative is John McCain's complete lack of leadership or coherent position on energy, particularly with regard to renewables and energy independence. Recently, Tom Friedman noticed that McCain had missed a number of key votes on energy, but it's even worse than Friedman wrote. As I noted many times before, John McCain didn't even have an energy policy during the Republican primary. His rhetoric is completely unmatched by his plans and his record. His lack of a coherent energy plan has been discussed here and elsewhere before, however, so now I'm going to explain in moderate detail McCain's dismal senate record on energy policy.

Here is a graphic depicting 33 of the votes that John McCain skipped that dealt with energy in the 110th congress. Several were important votes, and in one instance a bill failed cloture by one, vote, 59-40, and John McCain was the only senator to miss the vote. Now, I know that "missed votes" is often a simplistic partisan attack that neglects to take into account the importance of any particular vote, whether a measure would have succeeded or failed without the vote, and how busy senators are when they run for president. However, I think it is abundantly clear, and I will attempt to show, that this is not the case here. McCain missed every important energy vote over two years, in one case he was actually in his senate office but declined to go to the floor to vote. 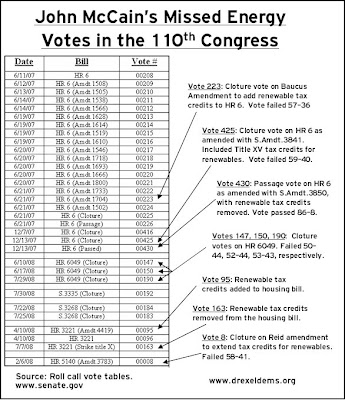 McCain's vote skipping is quite clearly not a matter of tight scheduling, but a combination of the low priority he places on energy, and the fact that his positions just aren't popular, and he doesn't want to be pinned by voting for them. However, his absence is effectively a "no" vote when Republicans block renewable energy legislation through filibustering.

On top of this though, McCain has the gall to tell voters that he supports renewables, and even lies about his support for the ITC/PTC tax credits. Take this video from August 14th. McCain's claim to support renewables is belied by his record and his plan.

In the interest of ducumenting his duplicity, here are several situations when John McCain has, through action or inaction, fought renewable energy legislation.

1) The CLEAN Energy Act of 2007, HR 6, was the omnibus energy bill of 2007. John McCain missed all relevant votes on this bill, including vote 223 in June of 2007. This vote was on the Baucus amendment to extend the renewable tax credits that are so important to the renewable industries. That vote failed 57-36, with Biden and Obama both voting for it, and McCain not voting.

Then, in December of 2007, HR 6 came up again. After failing to make cloture on the 7th (McCain not voting), it was again introduced at 10 AM on December 13th for vote 425. This time the bill failed 59-40, with McCain not voting. Crucially, this failure that McCain single handedly could have avoided, forced the senate to replace the version of HR 6 that contained amendment 3841 with amendment 3850, which stripped title XV from the bill and with it tax credits for renewables. This new version, without tax credits for renewables, was passed by the senate that afternoon overwhelmingly. John McCain missed that vote too, for good measure (Vote 430).

Interestingly, though, the day before at a Republican debate in Iowa John McCain said:"

"If oil reaches $100 a barrel, which many people think it may, $400 billion from America treasure will go to oil-producing countries. Some of those -- those monies will go to terrorist organizations. We have got to achieve energy independence, oil independence in this nation. I will make it a Manhattan Project, and we will in five years become oil independent."

The very next day he single handedly killed tax credits for renewable energy.

2) After the failure to include the tax credits in the CLEAN Energy Act of 2007, Democrats in congress tried to get them passed by attaching them to legislation in 2008. In February Senator Reid offered an amendment to the economic stimulus bill (HR 5140, amendment 3783). That amendment was fillibustered, and failed to bring cloture 58-41, with McCain not voting (vote 8).

Then, in April, the tax credits were added to the housing bill (HR 3221, amendment 4419). Again, however, Republican objection to the PAYGO provisions caused Democrats to strip title X from the bill. McCain missed all three relevant votes.

Following the housing bill, HR 6049 was introduced in the senate. HR 6049 was a bill to extend the tax credits for renewable energy, as attaching the measures to other bills wasn't bearing fruit. John McCain missed all three cloture votes, 147, 150, and 190. All three votes failed by slim margins.

3) John McCain's failure to support renewable energy or forward thinking energy plans isn't a new position, either. In 1999 an important vote came up that defunded solar and renewable energy research in the DOE by tens of millions of dollars, and though McCain showed up for that vote, he voted the wrong way.

In 1999 President Clinton sent his FY 2000 request for the Department of Energy (DOE) appropriations to the senate, including a request for $836.1 million for Energy Supply R&D, of which $446 million was for Solar and Renewable R&D. This represented a $62.9 million, or 19%, increase over FY 1999 funding of solar and renewables. When the Republican senate took up the bill, they reduced the Energy Supply R&D by $258.5 million, allocating only $577.6 million. This included reducing the Solar and renewable R&D funding by $90 million, an $11 million decrease in nominal terms from FY 1999 funding.

Jim Jeffords attempted to send the bill back to committee to restore the funding after his amendment to do that was ruled out of order. The vote that killed the funding was a "Motion to Table the Decision of the Chair Re: Motion to Recommit." The motion passed 60-39 (50 needed), and the funding wasn't restored. John McCain voted to defund solar and renewable R&D. Joe Biden voted to restore the funding. Vote 171 in the 1st session of the 106th congress. The CRS report is enlightening and infuriating.

John McCain apparently put the same priority on energy 9 years ago that he does today. At least that's one thing he hasn't flip-flopped on.

Finally, don't forget how important these tax credits are to encouraging renewable energy. Even as renewables are approaching price parity with current grid power, the tax credits are vital to achieving financing. Furthermore, the tax credits allow economies of scale to pick up in the manufacturing and production of renewable capital investments. Remember how much installed wind capacity dropped everytime the PTC expired? 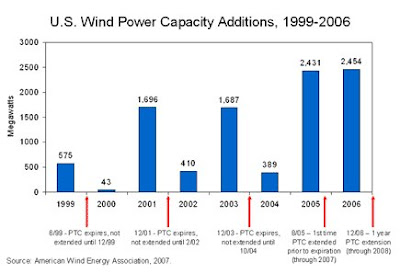 By the way, as I wrote this, Mitt Romney was on my TV lying about McCain's energy policy.