Dunces in the Corner 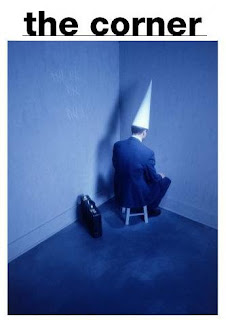 Last night at Drinking Liberally somebody who wasn't familiar with the National Review Online's "the corner" blog asked why we all thought it was the "most retarded collection of thoughts on the internet."

It would be impossible to document even a small fraction of the absurdity and stupidity at the corner, but I offer this non-comprehensive collection of corner highlights from the very recent past anyway. Note that this is a non-comprehensive list, in no particular order.

No, Sister Mary Kathryn, McCain-Clinton isn't going to happen. Next?

Yesterday, at 11 AM Kathryn Jean Lopez dropped a huge scoop on the cornerites.

So many e-mailers this morning are predicting that the McCain trial balloon is really about Giuliani. I'm not there, but here's one:

I don't think it's being floated for Liebermann or Ridge.
I think he's considering Giuliani.
- Might put NY in enough play to make Obama spend a lot of money there.
- Has name recognition and gets plenty of respect on law enforcement/national security
- Might be more palatable to pro-lifers if he were to make clear that it's McCain's pro-life administration

The McCain campaign has already hired a Giuliani staffer as the unnamed veep's communications director...

I'm actually having a hard time deciding what the stupidest assertion in that post was, but I'm leaning towards the idea that Rudy 9ui11iani could put New York state "in play." And two hours later she suggested McCain pick Santorum for VP.

And Larry Kudlow, the grouchy supply-sider and former host of Kudlow and Cramer, never misses a chance to look like an idiot. Like last month when he breathlessly reported that he was advised by a "senior McCain official" on double secret deep background, that McCain was abandoning his cap-and-trade.

So I picked up the phone and dialed a senior McCain official to make sure these old eyes hadn’t missed it. Sure enough, on deep background, this senior McCain advisor told me I was correct: no cap-and-trade. In other words, this central-planning, regulatory, tax-and-spend disaster, which did not appear in Mac’s two recent speeches, has been eradicated entirely — even from the detailed policy document that hardly anybody will ever read.

Except, not. It is true that McCain's cap-and-trade is a lamer version of a good idea, and that he certainly won't prioritize it like Obama would, but the idea that McCain would take the signature component of his climate change plan and secretly abandon it, but then tell Larry Kudlow (!) on deep background, is something that only a Cornerite could believe.

Finally, I note that the stupidity at NRO is not limited to the corner. For the magazine, Lou Aguilar recently penned a top ten list of why "Real Men Vote for McCain." Without getting bogged down on the whole list, I'll just note that his third reason doesn't make any sense at all to me.

I really don't know what kind of psychological issues or sexual hangups would make somebody write something like that, and frankly, I don't want to.

The National Review Online's Corner is for right-wingers who are too ugly for Fox News, and too stupid for a real job. It's where ideas go to die, and liberals go to laugh.