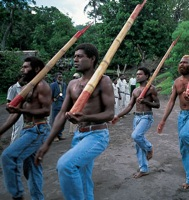 In one of my favorite speeches, the 1974 CalTech commencment, physicist Richard Feynman decried what he called "cargo cult science." Cargo cults are the anthropologically fascinating result of the interaction between primitive cultures and developed ones.

Most famously, during the U.S. island hopping campaign in the Pacific during WWII, we built military bases on many small pacific islands. The native inhabitants previously had little or no contact with modern materiel, and when the war ended and the bases were deserted. Not understanding the source of the equipment, many native societies formed cults to bring back the supplies. They constructed all the superficial trappings of the military bases; they built runways with bamboo airplanes to lure the planes back. Men sat watch with coconut and bamboo radio headsets. Soldiers marched with wooden rifles.

Feynman described cargo cult science as scientific research that had the trappings of real science, but lacked the crucial substantive measures tha defined science. A laboratory with colored fluids in beakers doesn't make a chemistry experiment. Testable hypotheses carefully measured and controlled for do.

In that same vein, I believe that the PUMA movement is an example of cargo cult politics. The PUMA groups (Party Unity My Ass) are nominally disaffected Hillary Clinton supporters, but a careful (or even cursury) examination of their politics betrays that they're more aptly described as cargo cult Democrats.

Since Sen. Clinton failed to recieve the nomination of the Democratic party, the PUMAs have tried to convince themselves and others that their movement is larger than the candidate, and that they are forming a "New Democratic Party." They have their slogans, and posters, and chants, and YouTube videos. They have all the trappings of a political movement, but where they fail short is the substance.

Presidential politics is bigger than hurt feelings and bruised egos. There are real, consequential policies at stake, and hundreds of millions of Americans (not to mention the rest of the world) are impacted by the choices we make. The PUMAs seem to acknowledge this, and yet they don't seem to understand it, and that is what makes it cargo cult politics.

They come up with lists of grievences, issues, and demands, without apparent thought to their meaning. They held a conference with no agenda, and the contradictory purpose of promoting Clinton's agenda and defeating Obama. They're all constructing coconut radios and blogging about it. For example, the much belabored distinction between Sen. Clinton's and Sen. Obama's health care plans was the issue of mandating adults purchase coverage for themselves. They both were otherwise similarly structured; reducing costs, an optional national plan, guarenteed coverage, etc. Neither were completely universal, and both aimed for universal health insurance, not universal healthcare. And yet, the PUMAs seized upon the adult mandates (which Obama actually has a rather sophisticated take on), declared that Obama's plan was insufficient, and accordingly, they support John McCain, whose plan for universal healthcare is emergency rooms.

They have all the righteous fury of a movement demanding action on issues, and yet they have no more than a superficial embrace of the policies. John McCain is staunchly anti-choice? That doesn't have real world impacts, it's just an abstract issue to the PUMAs. Reckless foreign policy? Just another talking point. Further examples abound.

They are a cargo cult because they seem to think that just by printing banners and blogging they have a movement. They have invented silly demands, but they are little more than paint on their wooden rifles. They miss that movements are driven by real issues and real grievences. Movements don't grow by hurt feelings, because anybody who doesn't already identify strongly with the cult doesn't have their feelings hurt. 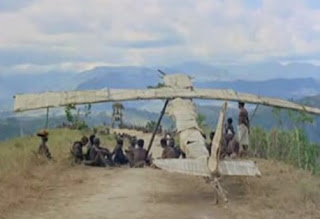 After their matron saint, Hillary Clinton, repudiated them at the convention they turned ever more deeply inward, safely into the reassuring embrace of themselves. It's kind of sad, in a way, as they sit and blog from their bamboo airplanes, waiting for the rise of their movement. Their numbers and influence are exaggerated, and their ranks are bouyed by opportunistic cranks. But they were fun for a while.