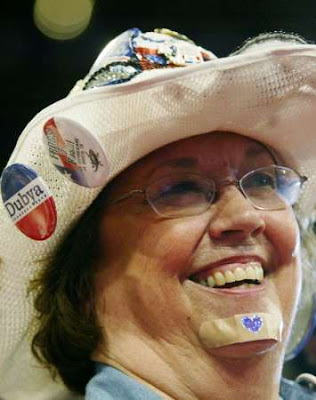 I caught a small amount of the RNC tonight, but I saw enough. I saw Fred Thompson call Obama a baby killer. I saw Joe Lieberman cuddle up to his right-wing overlords. I saw one of the 36 black GOP delegates. And I saw a markedly different attitude towards military service than the GOP showed four years ago.

Everywhere I looked I saw signs with "Service," "Country First," and slogans honoring POWs and veterans. But I'll never forget that this was the party that distributed band-aids with purple hearts on them to mock Sen. John Kerry's service just four short years ago. Suddenly the party that swiftboated on behalf of a draft dodger is running on a platform of service to one's country? Spare me.

I do find it worth noting that the Democratic party doesn't denigrate service when it's politically convenient. Sen. Obama showed us how to disagree strongly while being respectful. Sen. McCain and his party lack the grace to have such respect, and make no mistake; that disrespect it not aimed just at Democrats, it's aimed at the Democratic process of our country.

End of my rant.